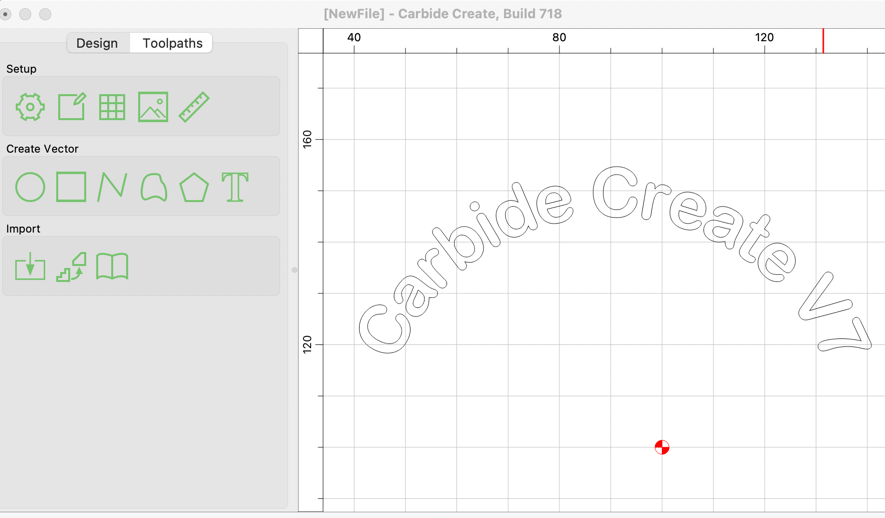 After weeks of beta testing, we’ve released Carbide Create V7 with a lot of big changes. The download can be found at: https://carbide3d.com/carbidecreate/download for those that want to try it out. It includes lots of new features so we’d like to encourage everyone to try it out.

And now, on to the changes…

Tabs are now a part of the vectors, not contour toolpaths.

We added a new tab command to add tabs to a vector. If you copy the vector, you copy the tabs too. This should be helpful for users that are doing production work where they may want to fine-tune the machining of a single item and then copy and paste an array of them for full production.

Look for the new command here:

Text objects now hold an alignment value of Left/Center/Right. For a single line of text that never changes, this doesn’t matter at all. If you have one or more lines of text that will change then this will be really helpful because the text will keep its alignment on the document after the text changes. 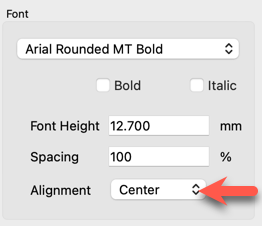 We also added a bit of code to update the text preview automatically as the parameters change. We may have to tweak this a little if we get feedback that some machines are bogging down. (It shouldn’t, we were pretty conservative about how often we update.)

Text on an arc

When text is on an arc, we use the middle of the text as the baseline so that text on the top and bottom of the arc appear to line up. There’s no reliable “middle” of a font so we determine that by taking half of the height of a “T” as the midpoint. That may or may not be perfect, depending on your particular font, but it seems to get you in the ballpark with our testing. 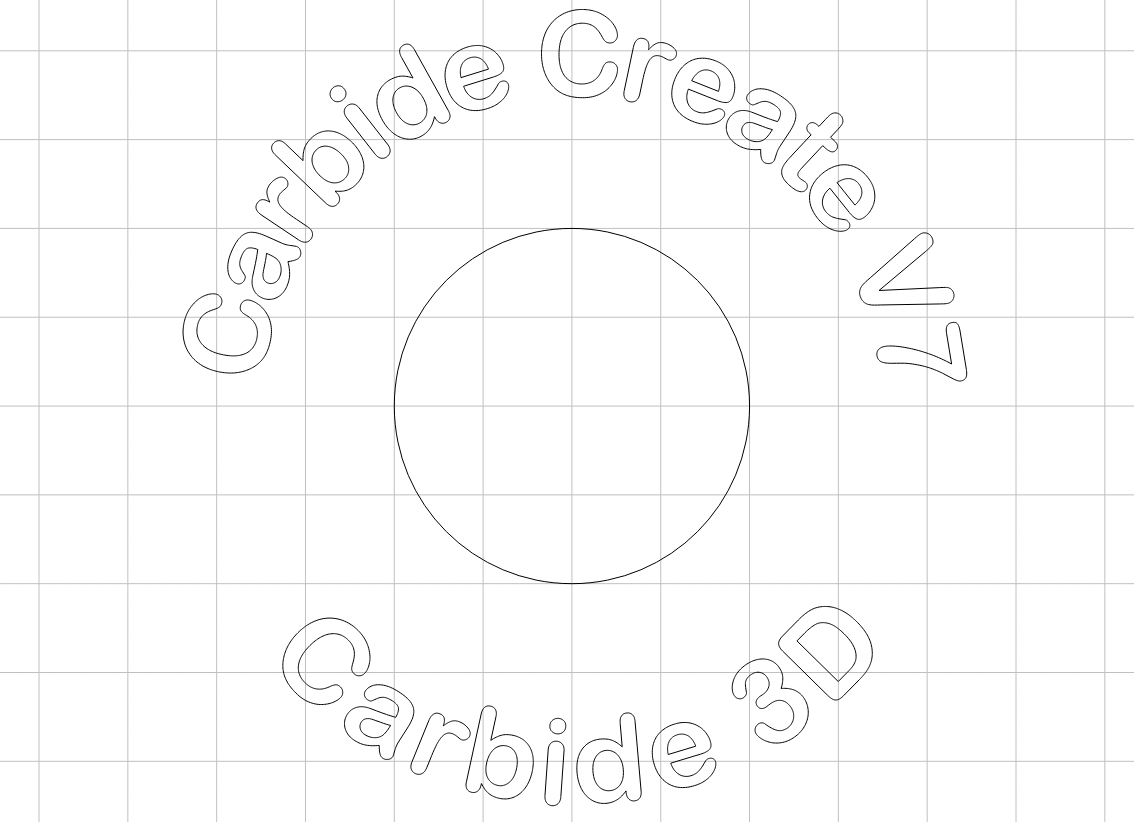 In almost every numerical field we now allow math expressions. Type in your expression and then hit “=” to evaluate it and input the answer. For instance:

These have been useful to us so far but the real win is that toolpath depths, both the start depth and the max depth, can hold an expression and update anytime the project thickness changes. For instance:

As you go through the change log, you’ll see a lot of notes about bugs in the expression code. This was a deep UI change and we think we’ve got it working well but be sure to let us know if you find anything funky.

Once we get this build tested we’re thinking about adding 3-4 other depth variables so that you can have a few intermediate depths values that can update toolpaths. We’ll see if that turns out to be a good idea.

Toolpaths can be linked to layers

Toolpaths can now link to a layer instead of individual vectors. If a toolpath is linked to a vector, it will recalculate any time the contents of that layer change. 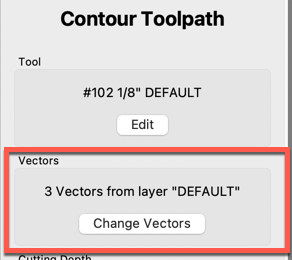 On the surface, this seems like a convenience feature, but we think it’s much more. When combined with the depth expressions above, it allows you to make template files that contain known-good machining precesses where you only have to add vectors to the correct layer and you’re good to go. There will be no need to tweak toolpaths.

All you’d need to do when starting a new job is load the file and add vectors to the correct layers. If you change the thickness of the stock, the toolpaths will update automatically.

ANGLE rendering is now the default on Windows

We’ve found the ANGLE rendering option to work well on Windows so we’re making that the default now. You should not notice any changes from this but it’s worth noting in case anything comes up. (I wish I could share some of the customer interactions that triggered this change.)

G-code is now held in the C2D file

G-code is now stored in the C2D file, not in an external G-code file. This has been a request for a while but it had to wait for a new file format to make it work and it brings a couple of benefits:

The other thing this fixes is a growing support problem. We’ve been dealing with a lot of users who buy other (non-Carbide 3D) machines and then use CC. While it’s great that people are using CC, it’s bad because they’re buying from companies that provide little-to-no support so they end up trying to get us to help them use their machines and it’s not always clear that they don’t own one of our machines until there have been a number of emails back and forth, or a phone/video call. This is now getting in the way of us providing support to Carbide 3D customers so it needs to end.

We’ll be honest here, we also deferred this change because it felt unnatural to have the toolpaths in the design file. We’re not quite sure why it was unnatural other than, “because that’s not how it’s done”. After using it for a few weeks, we’ve become big fans of having a single file for everything and we don’t think we’d ever want to go back.

When you click the “Save Toolpath” button in CC V7 you’ll get a popup to save them in the current file or create a new C2D file. The “new C2D file” option will not update the current filename for future saves, which makes it a good way to output the currently-enabled toolpaths, but keep working in the original file.

The new C2D file also compresses most of the data so there’s generally no space penalty for putting the G-code and the design in a single file.

You’ll need to download Carbide Motion 565 or later, which supports the new C2D file format. 565 also adds a button to save the G-code to an external file if you want to review or edit it outside of CM.

Carbide Create Pro still has the option to save G-code to a standard file if that’s what you’re looking for.

We’ve also been testing this web-based G-code extractor for users that need to get their G-code out without Carbide Motion: https://my.carbide3d.com/extractgcode/ . It’s not gated by a customer list yet, you only need a login for the community site, so feel free to give it a shot.

Finally, V6 will remain available at https://carbide3d.com/carbidecreate/download6 for users that want to get a copy of it, or roll back from V7 once we release it.

V7 adds a Rest Machining option for pockets that allows you to only machine the areas left behind by another pocket operation with a larger cutter.

V7 adds the ability to import an STL file and then apply it to the model in Carbide Create Pro. It’s still very much a work-in-progress but it’s functional and we think it’ll add a lot of capability to the kinds of projects you can do in Pro.

We also added a very basic toolpath to create Keyholes without manually editing G-code, which is what a lot of users have done up to now.

V7 adds a Measure command to make it easier to determine the distance and angle between two points. It’s a simple command but it’s been high on the request list for a while.

Some users wanted to use the Measure command as a way to construct geometry, which is not really the intended use. Instead, we added segment length and angle information to the Polyline command that should make it a lot easier to create construction geometry that you can snap other objects to.

After several user requests, we’ve added a “Notes” command so that you can add notes to your future self. You might want to hold change revisions, information about the customer or workholding, or where you sourced material for the project. It’s free-form and it’s totally up to you.

The Boolean commands have always been confusing for new users. It’s not always clear which you’d like to use, union, subtract, or intersect, so a lot of times getting the correct version required a lot of try-undo-try-again. We’ve reworked the Boolean command to show a preview of what you’re going to get so you can try each before click “ok” to keep the results.

We’ve also made the Boolean commands work better for groups so that it’s easier to create things like stacked signs or clip textures and patterns to fill another vector.

Finally, we’ve added a “Weld” option that does a simple union of all selected vectors without any attempt to figure out if one vector is actually a hole inside of another vector.

We’ve heard a number of comments like, “I don’t know what you changed here but it feels a lot faster”, which is not scientific, but it’s nice to hear.

The changes above represent all of the deep changes we plan to make in CC7 so they were the minimum we needed to get done for the first release. The rest of the todo-list items are more user interface changes and changes to commands that don’t span the whole program. Those changes should be dripped out over the next few months.

CC V7 should not interfere with V6 on your machine so it should be safe to use both in parallel. (And again, V6 will remain available at https://carbide3d.com/carbidecreate/download6 )

We’d love to hear how CC V7 works for you, whether the feedback is good, bad, or indifferent. Please let us know what you think.