Nomad 3 (And Something Else)

If all goes well, we’re only a couple of weeks from opening up ordering for the Nomad 3 so it’s time to share some specifics.

First, let’s talk about why we decided to make a new Nomad. Since starting the company seven years ago, we’ve depended on an outside machine shop for all of our 5 axis work, which amounted to three parts on the last Nomad. The shop we used was very capable but they never seemed to get ahead of our orders so we were perpetually fighting a backlog. It seemed like they were always on the verge of getting caught up so we stuck with them, until we got “that one delivery”.

We ended up with a batch of parts that were out of spec and when asked about it, we were curtly told that the parts were, in fact, within spec. That was the straw that broke the camel’s back and we bought a 5-axis machine later that week.

So we ended up with a new 5-axis machine, three new parts to make and the arrogance to say, “Well, if we’re going to make these parts anyway, why not fix up everything we’re been wanting to fix anyway?” It was a bigger project than we thought, and it happened to coincide with Covid so it took way more time than we expected, but it’s finally done and we can share the results. 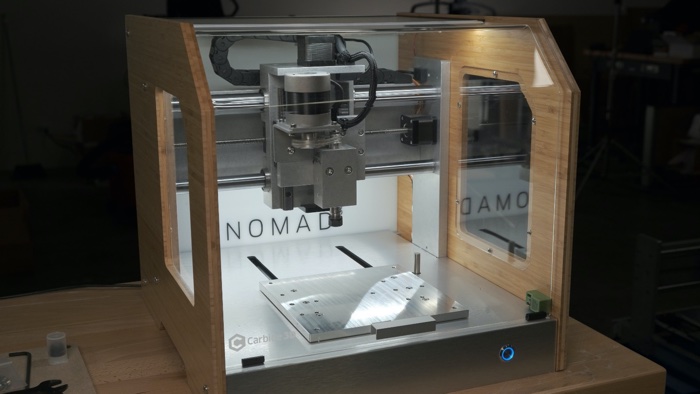 Here are the highlights for the Nomad 3:

Almost every part of the machine has changed in some way so there’s no upgrade path from an older model, the Nomad 3 is all-new.

If all goes well we’ll be opening up ordering for the Nomad 3 on Oct 15th with shipping beginning shortly after that. We’ll probably have at least one more upgrade to share before shipping begins.

We also have a new Shapeoko Pro.

Shapeoko Pro raises Shapeoko 3 to a new level of performance and usability. It’s not a replacement for Shapeoko 3 (which is not going away, in case you were wondering), Shapeoko Pro is an all-new addition to our lineup.

Here are a few specs:

Let’s go through each point in a little more detail to share the reasoning behind each change.

(Quick note: the pictures below are from our final engineering prototype so the final product will be cosmetically different.)

V-Wheels are a robust and reliable motion system and we don’t have any plans to do away with them generally but linear bearings, given an equal frame to mount them on, are more rigid. In our testing we’ve seen a meaningful increase in the cutting speeds we can get before chatter becomes a problem.

Shapeoko 3 uses 9mm belts, so bumping the width to 15mm means that the overall stiffness is increased by more than 60%.

Some people will question that choice of belts at all over a screw-driven system, but we remain big fans of belts.

One thing to note is that we’re going back to fiberglass belts instead of steel, which is something we’ve already done in the Shapeoko 3. The steel-core belts gave us a slight increase in stiffness but we saw a much higher failure rate when moving to steel. We suspect this was due to metal fatigue as the belt went around the pulley repeatedly.

Based on our testing, the new 15mm fiberglass belts will be much more stiff than the 9mm steel-core belts while being more durable.

This is a big deal for a couple of reasons, first for the added convenience and function, and the second reason is related to the fundamental structure of the machine.

We’re calling this new table our Hybrid Table because we’ve tried to combine the elements of the existing T-Slot table and the MDF wasteboard into a best-of-both-worlds system.

T-Slots are on 100mm centers, which gives you lots of clamping options for your projects.

MDF filler strips stand above the t-slots by 3mm, so you have plenty of material to face the MDF down a couple of times to get the table totally flat without hitting the aluminum t-slots.

Normally, a t-slot extrusion is a small c-shaped aluminum extrusion and the filler slats go in between. With the Hybrid Table, we flipped that around completely. Our new t-slot extrusion is split at the t-slot and fits underneath the MDF slats to both support the MDF and to connect to the structure underneath.

And that’s the big structural change we made. There are now tubes underneath the table (running right-to-left) that fully support the table and create a grid of aluminum extrusions that are fully bolted together. By the time you assemble everything, it’s very stable and very rigid.

Remember those horizontal tubes underneath the table? Those are also used to support the Y tubes along their length. Our Y tubes have never had a rigidity problem but this change fully ties the table into the motion structure for maximum rigidity and stability.

All extrusions are precision machined

Between the X and Y tubes, the hybrid table extrusions, and the tubes under the table, there are a lot of parts that have to mate together. All of the extrusions are machined in-house to make sure we deliver a machine that fits together well.

At the risk of overstating the point above, we don’t use any 80/20-style t-slots or t-nuts for the machine structure, it’s all machined, drilled, and tapped.

BitSetter is our absolute favorite accessory and it’s something we’re very proud of. We created it with the original Nomad and then eventually moved to the Shapeoko. We’ve heard from many users who have one that it’s become an indispensable part of their workflow.

If we’re going to call a machine “Pro” it’s got to come with BitSetter.

We took this opportunity to simplify and improve the router mount. Our Carbide Compact Router, the Makita alternative, and the VFD spindles that some people use, are all 65mm so we’ve decided to make that the standard for the Shapeoko Pro. This new mount is taller and beefier than the mount on the Shapeoko 3 to increase rigidity.

We’ve had this on the bench for a while but it’s been tough to figure out when to roll it out into production because it’s not a drop-in replacement. We’re excited to finally have a way to get it out into the world in both the Nomad 3 and Shapeoko Pro. The 3.0 board is easier to install and has better EMI performance- it’s the best board we’ve made yet.

There’s very little sheet metal on this machine. All of the plates in the motion system are precision machined aluminum.

Shapeoko Pro comes with a lot more of the assembly done in our shop. We’ll be curious to hear how quickly average people put it together (that is, people who weren’t involved in making the machine) but our best estimate is that it’ll take about half the time to assemble as Shapeoko 3.

If all goes well, we’ll be taking orders on Oct 15, the same time as the Nomad 3, with shipping to begin a little after that. We’ve got a lot of parts in production so we’re hoping we’ve got a solid head start.

We’re trying to get the Shapeoko Pro announced and out into the world as quickly as possible so the first batch is going to be called “Early Adopter” because there won’t even be an assembly manual done in time for launch. Assembly will be detailed in a video by our own Winston Moy, with the printed manual to follow.

Only the XXL size will be available at launch with the XL and Standard sizes to follow after that. We want to make sure we get one size totally dialed in before trying to ship the full product line. 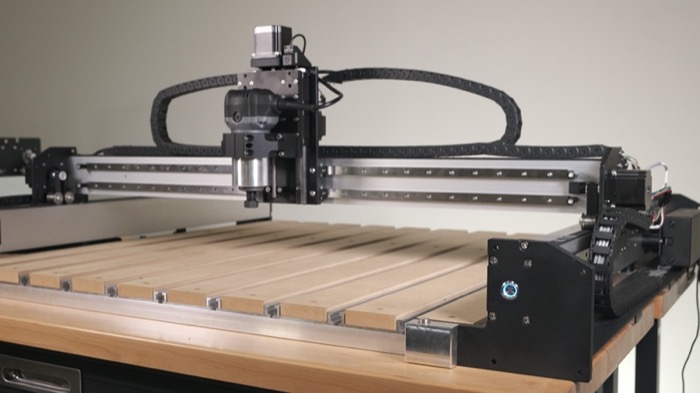 Shapeoko XXL will be priced at $2800 with free shipping within the US and Canada.

As much as we love Shapeoko 3 and the Nomad Pro, the Shapeoko Pro and Nomad 3 are exciting for us because they’re the result of seven years of experience and customer feedback, a five-person product development team, all challenging one other, and a significant production and prototyping capability. We never could have made this machine even a couple of years ago.

We can’t wait to see what you make with Nomad 3 and Shapeoko Pro.