One of the best applications of a CNC machine is engraving. Whether you’re cutting metal, wood, or plastic, engraving is a process that’s very difficult to do by hand because of the small scale and the fine detail involved. This is exactly where CNC machines excel.

What is CNC engraving?

Engraving is a shallow cut into your part to create fine detail. Engraving is frequently used to add text for personalization or other information, like branding or serial numbers. Engraving can also be used to add markers, measurements, or alignment points to mechanical items.

In most cases engraving is decorative so it’s more important to make the final part look good than to hit specific dimensions, which give you a lot of freedom to pick the machine and cutter that will be most productive for you.

What CNC machines are used for engraving?

Almost any CNC machine can be used as an engraving machine, whether that’s a CNC Router or a desktop CNC machine, although there are a few features that can make a particular machine more suitable for engraving.

Ideally, a CNC machine used for engraving would include a high-speed spindle. There’s not a clear definition of what that means but we’d say that anything over 12,000 RPM is “high-speed”. It’s important to have a high-speed spindle because most cutters used for engraving are very tiny, and tiny cutters need a lot of RPM to move through the material at a reasonable speed. You can absolutely engrave with a lower RPM, but it’s not going to be very efficient; for high efficiency, you’re going to need lots of RPM.

The second thing you need is a fairly accurate and flat CNC machine. Engraving is typically very shallow so it’s important for the machine to be setup so that the cutter moves as parallel to the object to be engraved as possible. Otherwise, the depth of engraving will vary along the object, leading to a poor result.

So, what machines work well for engraving? Our Nomad Desktop CNC machine is perfect for engraving small items and our Shapeoko CNC Router works well for larger items and wood in particular.

What materials can I engrave?

A CNC engraving machine should have no problem cutting wood, plastics, or metal.

Compared to metals and plastics, wood is a soft material so it cannot hold a ton of detail. Because of that, you’ll typically end up engraving wood deeper, and using larger bits, than you might use to engrave plastic or wood.

You can engrave on any type of wood but you should plan to make the size of the engraving larger on softer woods to get enough detail.

Almost all common metals can be engraved on a CNC machine, including:

Even if your CNC machine is not able to cut all the way through a block of metal, it’s probably capable of engraving it because the cutting forces are a lot lower when engraving.

While it’s possible to engrave almost any plastic, you’ll definitely have better luck with harder plastics, including:

Softer plastics, like polyethylene and LDPE, will work but will require more care.

In all plastics, it’s important to use very sharp tools and dial in your speeds carefully. Dull tools and slow cutting speeds can create friction which leads to melted blobs of plastic stuck on your engraving bit.

What cutters or bits do I need for engraving?

There are three common categories of cutters used in CNC engraving machines, V-cutters, engraving cutters, and ballmills. Each has advantanges, from performance to materials to cost. 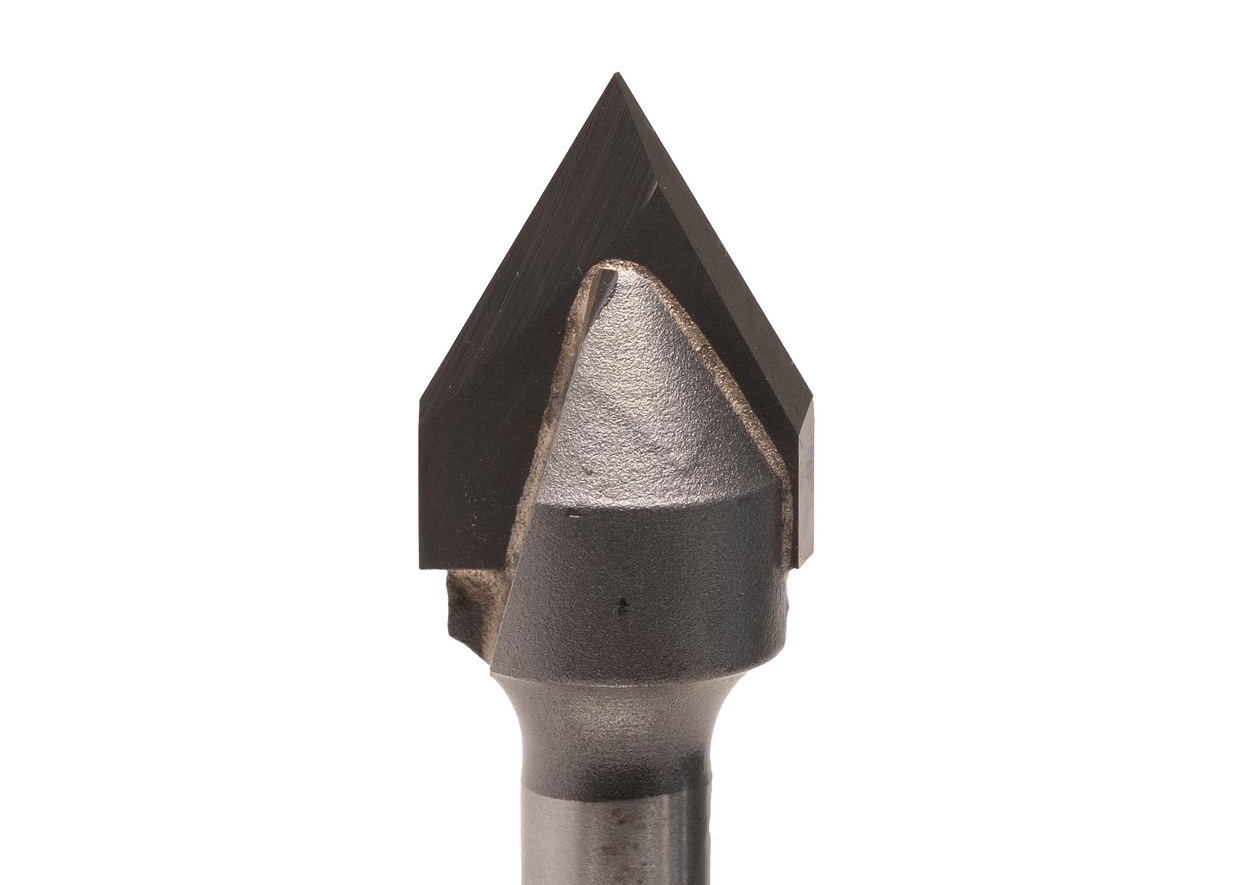 The most common cutter for engraving on wood is a V-bit, and it’s usually in a CNC router. A V-bit is a pointed cutter, typically made of a steel core with carbide edges brazed onto it. They’re available in a range of tip angles to give your project the look you want. Smaller angles create finer detail while larger angles create wider, but shallower, features.

We make a series of V-bit for CNC Routers, including our Shapeoko. 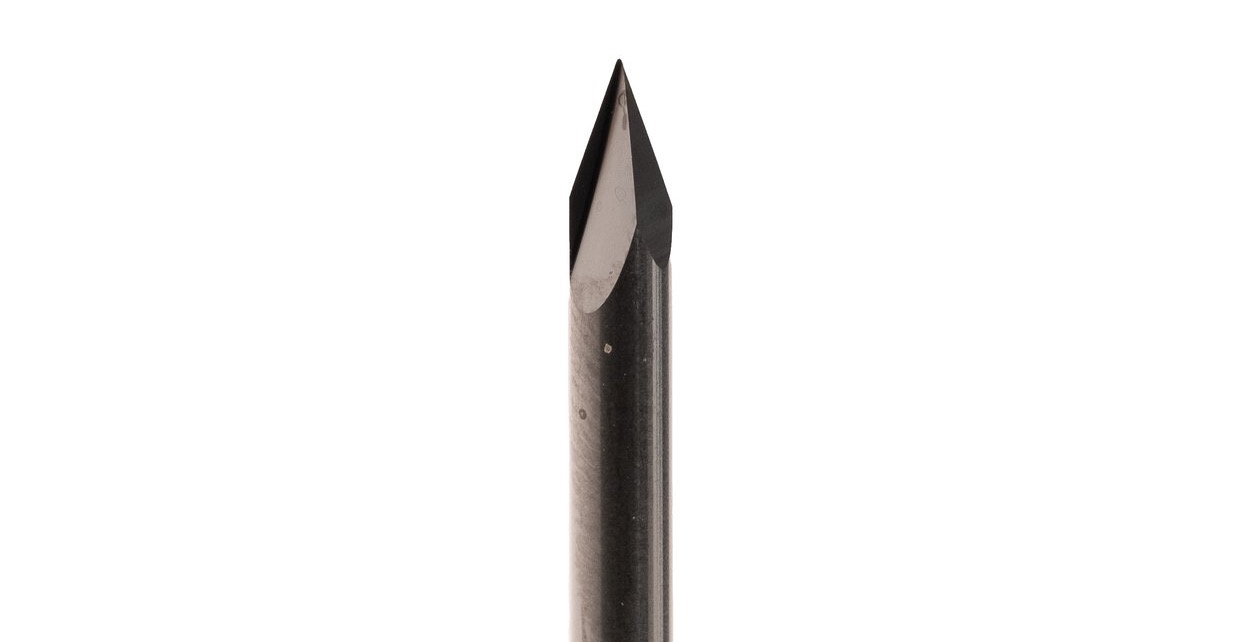 First, the tip of a cutter is the most delicate part and the sharper any corner is, the more delicate it is. Second, a flat-ground cutter only has a single cutting flute so each rotation can only cut one tiny chip. When put together, these are low-productivity cutters that you need to be very careful with (luckily, they’re cheap).

As a comparison, we make a couple of dedicated engraving cutters, specifically for our Shapeoko and Nomad machines (though they work well on any CNC milling machine). We grind a small radius on the tip of our engravers, between .0025” and .005”. That sounds like a tiny feature but it adds a lot of durability to our cutters. We also grind two flutes into the cutters for additional productivity.

Whichever style of engraving cutter you choose, they’re a good choice for shallow engraving in plastic and metal.

A popular alternative cutter for engraving in plastic and metal is to use a small ball end mill, something in the range of 1/32”. The benefit to a ball end mill is that the lack of a sharp tip makes them very durable and they’re typically ground with 2-4 spiral flutes. The downside is that the engraving may not be quite as sharp as an engraving cutter but, the tradeoff in productivity might be worth it. An example of a ball end mill that can be used for engraving is our #121 1/32” cutter.

What software do I need for a CNC engraving machine?

Engraving software is actually pretty simple since it’s mostly a 2D toolpath that only involves following a line. The most convenient software is our Carbide Create CAD/CAM software. It’s built for 2D machining, and it allows you to start from a blank page or import your own design to cut.

Whatever software your use, the engraving process is the same:

Engraving toolpaths directly follow the design vectors so it’s very easy to create a toolpath since there’s no need to worry about which side of the line cut, or put a lot of thought into the order of cutting. The 2D contour toolpaths can be thought of as pen strokes, so they can be either open or closed vectors. It doesn’t matter at all for engraving.

The only caveat to the process above is using a V-bit on wood. As we mentioned above, most wood engraving is a lot deeper than traditional engraving so a V-carve toolpath is used. V-carving is a unique toolpath that uses a V-cutter to machine an entire region rather than just a stroke. V-carving gives the finished project a nice dimensional look with sharp edges without taking much time to machine. V-carving toolpaths operate on regions, rather than just lines, so they require closed vectors to work.

Wood being v-carved on a Nomad Desktop CNC 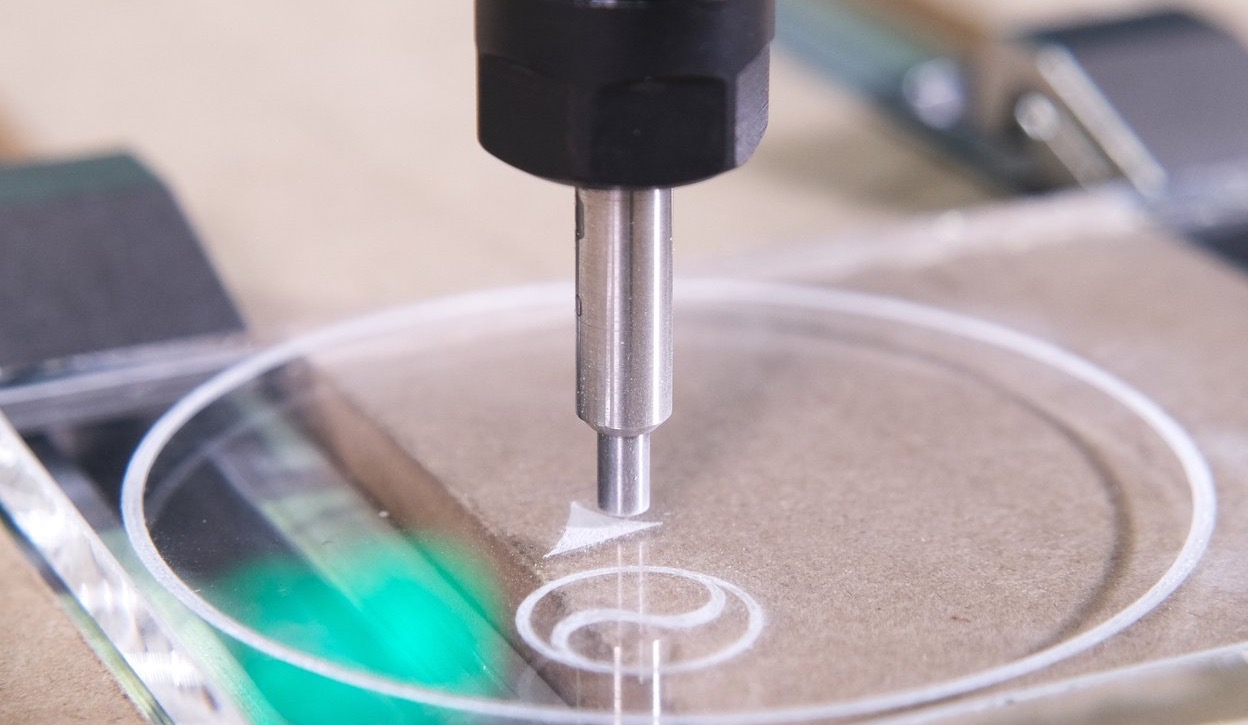 Because the diamond drag bit is pressed against the material, there’s not a lot of cutting depth and not a lot of control over what little depth there is. Drag engraving is capable of generating spectacular results in materials that typically cannot be engraved on a CNC milling machine.

We make our own bit for small CNC machines, the McEtcher Diamond Drag Bit.

Diamond drag bits do not require any special toolpaths. You can use the same 2D contour toolpaths that are used for traditional engraving cutters, with the exception that the spindle should not be turned on.

Drag engraving is the easiest engraving option available. You don’t need a high-speed spindle and the spring-loaded tip makes the process very forgiving of uneven material or questionable workholding.

What about laser engraving?

A lot of users are interested in adding a laser to traditional CNC routers but that’s not something we recommend. We recommend a dedicated laser cutter or laser engraver because the software and safety features will be better integrated into the machine compared to a bolt-on solution.